Home > Everything about HIV testing

Everything about HIV testing

The best way to find out if you have HIV is to take an HIV test. Different types of HIV tests will check your blood to see if you are infected. Most hiv tests cannot recognize an HIV infection immediately because the body needs time to raise antibodies against the HIV virus. You can read everything you need to know about HIV testing on this page.

Test yourself on HIV regularly

HIV can be detected in the blood, three months after transmission. This has to do with the time it takes the body to produce antibodies against HIV. As with any virus, the body makes antibodies against it. Only with HIV the antibodies cannot eliminate the virus. The presence of antibodies indicates that you have HIV. If you have symptoms of HIV, it is advisable to do an HIV test immediately.

An HIV test after a one-off unsafe sexual contact

If you have physical complaints after unsafe sex

If you are pregnant

In the Netherlands for example, the HIV test is part of the usual prenatal care. All pregnant women are offered the HIV test, because if you have HIV, you can pass the virus on to your baby during delivery and through breastfeeding. This can be prevented with medication. You can refuse this HIV test, but we recommend that you take the test.

If you have recently taken a risk

If you had an HIV risk one or two days ago, you can consult a doctor if immediate preventive treatment with HIV inhibitors is helpful. It is possible to ward off HIV infection by taking a course of HIV inhibitors within two days but no later than 72 hours after the possible infection. This treatment is called PEP (Post Exposure Prophylaxis) and lasts for a month. A doctor will only recommend this treatment if there is a significant HIV risk. Contact your doctor or hospital. Hospital departments usually also have the option to consider and implement PEP treatment.

If you are HIV negative:

The HIV self-test indicates that you do not have HIV. Always take measures to prevent HIV, for example by the use of condoms during sexual intercourse. If you have a high risk of infection, we advise to take medicines such as PrEP (Pre-Exposure Prophylaxis) to prevent HIV.

If you are HIV positive:

If the HIV self-test indicates that you have an HIV infection, you can still take steps to protect your health from becoming worse. We advise to talk to your doctor about an antiretroviral therapy (ART). Nowadays people are still able to have a good live when they are taking ART, It helps people with HIV to live longer, to live healthier and to reduce the risk of HIV transmission. We recommend that people who have been tested positive on HIV to start ART treatment as soon as possible. Please consult your doctor and he will help you decide which HIV medication to take.
It is also very important to notify the partners to have had sex with and inform them that you have been infected with HIV, in order for them to get tested as soon as possible.

All people must be tested for HIV

We recommend that everyone between in the age of 18 and 60 who are sexual active should be tested for HIV at least once as part of regular health care. People who have unsafe sex on a regular basis should be tested every 3 months, this is the only way to know your status on time.

Acts that increase a HIV infection are:

The HIV self-test is very good for routine testing and will give you a direct result. As mentioned before we advise to get tested on HIV on a regular basis if you have had unsafe sex. The INSTI HIV self-test detects HIV antibodies in the blood. Most people develop enough HIV antibodies to be detected three to four weeks after a HIV infection. Using the HIV self-test you will get an accurate result in 60 seconds. With the INSTI HIV self-test, a small blood sample is taken in order to be able to get tested for an HIV infection. The HIV self-test is as accurate as a standard HIV test at for example the doctor. If you have tested negative on HIV, then you do not need to be tested further on HIV. If you have tested positive on HIV, you will need to do a new HIV test as soon as possible, we recommend a laboratory. The advantage of the HIV self-tests is that you can do the test alone, for example at home and you will get a direct result.
HIV POC tests work just like HIV self-tests, but you conduct it at the doctor’s. The advantage of this way of HIV testing is that you get a consultation. 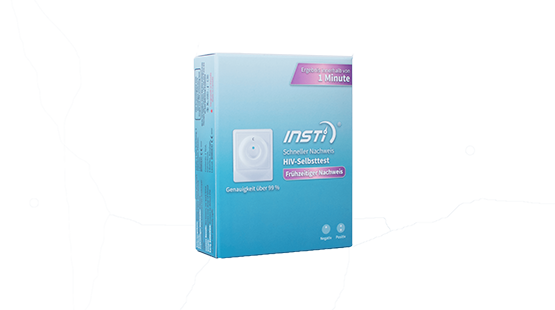